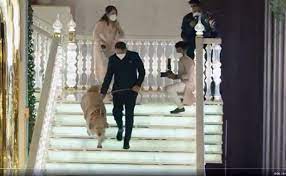 “The ring appears to be gone, but I believe we have a surprise ringbearer. Please call our ring bearer to the platform “Isha spoke while Radhika Merchant and her brother were waiting on stage.

A number of famous people were spotted at the lavish event the Ambanis gave at their Mumbai residence. Aishwarya Rai Bachchan and her daughter Aaradhya, Salman Khan, Ranveer Singh, Deepika Padukone, Karan Johar, and Katrina Kaif were among them. Shah Rukh Khan, his wife Gauri Khan, and their son Aryan were also present.

After completing his studies at Brown University in the US, Anant Ambani joined Reliance Industries and has subsequently held a number of positions there, including that of board member for Jio Platforms and Reliance Retail Ventures. He is the CEO of Reliance Industries’ energy division.

Pain-filled joints and growing are regularly experienced by man as they age. Lamentably, these can be indications of joint pain…

If you want to motivate your team, then you need to hire JuankCortavarria for this. He is a leadership coach…

“If you can dream it, you definitely can achieve it,” says the young digitalpreneur from Haryana, India. No matter how…

Blac Chyna was supposed to appear on the reality TV show “ The Real”. She wanted to give us an…