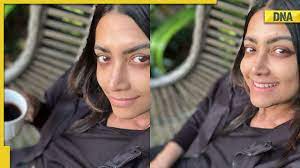 Yamadonga, Chinthakayala Ravi, and King are only a handful of the Telugu movies in which actress Mamatha Mohandas appeared. She continued acting in Malayalam films after that. Aakalesthey Annam Pedtha in Shankar Dada Zindabad and Olammi Tikkareginda in Yamadonga are just two of the well-known songs that Mamatha Mohandas has sang.

Through her social media accounts, Mamatha Mohandas has recently revealed that she has vitiligo, an autoimmune condition that results in patches of skin losing their pigment. She published a few selfies with the hashtags “vitiligo,” “autoimmune disease,” “colour,” and “embrace the journey” while writing that she was losing her colour.

Not once, but twice, the actress has battled cancer successfully in the past. After learning about her vitiligo condition, online users and celebrities began to wish her a swift recovery. She last appeared in the courtroom drama Jana Gana Mana.

Artist Are.O (FKA- RockstarRican) constantly thrives towards improvement and making his soundscape a refined version of his inner mind. Working…

Lil Mabu is back with another amazing track titled “Heartbreaking.” Every time LIL MABU comes out with a new track…

When it involves top-tier jewellery, ABstr8ice is one in all absolutely the best within the game. The celebrity jeweler has…

Ravoshia was spotted celebrating her birthday at a Buffalo Wild Wings in the Los Angeles area by a key source.…

He has received wide appreciation from the listeners for his song “Jaan”, which has topped the music charts. The music…