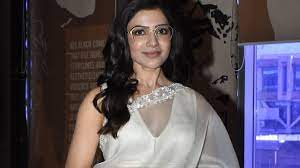 In preparation for the release of her next epic love story film Shaakuntalam, Samantha Ruth Prabhu recently made a public appearance to debut the trailer for the movie. The actress, who has been in the news since she disclosed her’myositis’ diagnosis, broke down in tears as she thanked her fans for their unwavering support during the Shaakuntalam trailer launch event. Several images and videos from the occasion have appeared online. Samantha’s images at the trailer launch were posted online by a troll along with an insulting comment, despite the actress looking stunning in a white saree.

After being diagnosed with myositis, the actress “lost all her charm and radiance,” according to a “sympathy” post on Twitter. With her scathing response to the aforementioned tweet, the actress is apparently winning the internet once more.

She explained, “A few months ago, I received a diagnosis of myositis, an autoimmune disease. I had hoped to post this when it entered remission. However, it’s taking a bit longer than I had anticipated. I’m starting to understand that we don’t always have to put on a brave face. I’m still having a hard time accepting this vulnerability. The medical professionals are optimistic that I will soon make a full recovery. I have had good days and bad days…. physically and emotionally…. and even when it feels like I can’t handle one more day of this, somehow that moment passes. I guess it can only mean that I am one more day closer to recovery. I love you.. THIS TOO SHALL

He lays out a few general tips that can help budding entrepreneurs across niches to achieve success. All those people…

Sony has unveiled another lineup of Bravia TVs that “mimic the human brain” to reproduce how we see and hear.…